Through a combination of wonderful timing, the kindness of strangers and miraculous good luck, I spent most of my latest trip in a graveyard.

It was a spur of the moment email to photographer and artist Bran Symondson which led me to be selected for a trip to Mexico to photograph, document and experience Día de los Muertos, or as it is internationally known: the Day of the Dead. One day I was sat in a Brussels hostel drinking coffee – three weeks later, I was in the Gatwick Clubhouse lounge, waiting to fly out and meet a small group of photographers, courtesy of Virgin.

The Day of the Dead culture has always fascinated me. I had been intrigued by the funerary culture wholly different from my own, seen the sugar skulls and been in awe of their delicacy and of course, seen the famous opening parade scene from the most recent James Bond film. What I didn’t realise is, the Day of the Dead is really nothing like how Spectre portrays it at all. Instead it is a colourful, proud tradition that is very personal to the local people.

A brother and sister taking part in a family meal. They are sat by the grave of their father.

Our photography assignment took us to the Yucatán Peninsula, basing ourselves between Cancun and Tulum, with a daytrip half way through the week inland to Valladolid. With the main festivities taking place on November 1st and 2nd (children are remembered on the former, adults the latter), we had a limited window to capture the real story behind the holiday – which is now garnering so much attention that Mexico City have started to replicate the Spectre carnival to cater to the newfound tourism it is welcoming.

In the beginning, I was very wary about how to approach this subject – death is such a personal tragedy, and to ask to photograph someone during a time of remembrance seemed terribly intrusive; it would certainly be taken as such in England. I wasn’t at home, however, and this was a very different culture, as I was constantly reminded by all those who said yes to the portraits. In fact, the only people who said no to having their portraits taken over my entire time in Mexico were a couple of small, shy children.

From the moment we arrived and the sweet scent of the floral stalls hit us, I knew it would be different to any other memorial service I had ever taken part in. Everything was awash in colour, from the freshly painted blues, pinks and greens of the graves, to the big bright crosses available to purchase. Everyone was very welcoming, proud to talk of the family and friends they cared for so deeply. Through our translator and a mix of Spanish and English, I heard stories of fathers, mothers, children and grandparents, some of whom had passed twenty years ago, some just a few months ago. There were smiles and waves from adults, whilst children ran around the cemetery laughing with their dogs. Throughout the day we also saw many people sat eating picnics with their families, using the stone graves – nearly all of which were above ground – as tables. Even after they were done, drinks and food were left behind for those in the graves.

There were some tears, of course, but not nearly as many as I was expecting. Mariachi bands, wandering around dressed in colourful red uniforms, would play requested songs in exchange for 120 pesos, and it was only then that I saw a few family members pass tissues around. The mariachi sang beautiful traditional songs around the freshly tidied and decorated graves, drawing small crowds and extra, voluntary singers. 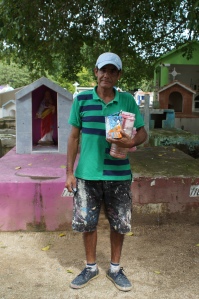 Jesús, on the first day we met.

My favourite moment spent wandering around was meeting and talking in depth to a gentleman called Jesús. It was our first time in a cemetery, the day before all the proceedings actually begun, and he was painting a grave in preparation for it all. He passionately explained what the celebration was about, and invited us back to see him on the main day (which we gladly did). He went on to say that sometimes, during the Día de Muertos, people talk of feeling the spirits of their families and ancestors being present among them. They shiver. They feel a warmth. He’d personally never experienced this, and he wasn’t sure he even believed it, but he still wholeheartedly takes part in the practise every year. It’s his heritage and culture, he told us, and it’s his duty.

Coming soon: swimming in cenotes, watching wild turtle hatchlings, and everything else we got up to Mexico, plus a crazy 24 hour layover in Havana.

11 thoughts on “A Festival of Life: Mexico’s Day of the Dead”