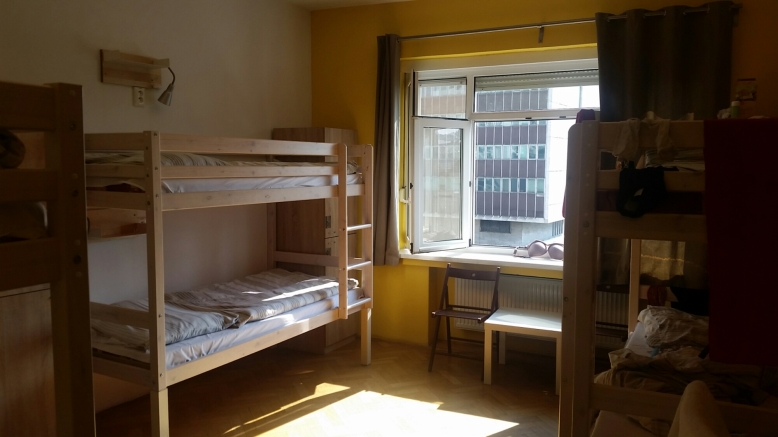 The location is pretty ideal. Essentially just twenty minutes walk from almost everything in Bratislava, you can’t really get lost. The hostel is also right next to a huge Tescos, and a tram stop if you don’t feel like walking anywhere.

The second I arrived I was greeted by two huge smiles and a genuine welcome. My check in was super easy, and completed with a really thorough introduction to the city. Any questions about food, transport or sight-seeing? They covered it all patiently and in detail. I was also invited to the free cooking class that evening. Free food? I’m in.

My room was a 6 bed female dorm. Admittedly we had bunks, but they were solid and didn’t creak at all. I couldn’t even tell there was someone sleeping in the bunk above me. Every bed also had its own lamp, socket and shelf, plus a large locker. There was also a large, clean ensuite with shower.

I was so lucky with my roommates. Because Bratislava is a rather small city, they changed almost nightly, but every single person was awesome. I met girls from Vienna (my next stop) who wrote an entire page of things for me to do/see/eat when I got to their city, and another two girls from Berlin, who swapped contact details so we could meet up when I got there too.

I arrived at the free cooking class (Thursday nights) early and the kitchen was already full. Immediately half the people were put to work preparing the ingredients (we were making a traditional soup with bacon, potatoes, onions and sour cream), whilst everyobe else had a beer as there were too many of us to all do a job. The half hour of cooking gave everyone the opportunity to chat and joke about and by the time the food was done, everyone was pushing the dining room tables together so we could have one big feast.

The food was excellent and the atmosphere was really fun. A bunch of us ended up staying in the dining room until the early hours of the morning, just chatting and laughing the time away. Its a really fabulous idea from the hostel, and one I haven’t ever seen before. They also have a pub crawl, live music events and can show you where to find the free walking tours.

The hostel itself has a small laundrette, a bar, a small community kitchen, a dining room and a couple of common room areas with comfy seats and beanbags. They do a small breakfast deal (coffee and a croissant) for a small amount of two Euro, but as I said before, there is a giant grocery store less than a minute away. The dorm rooms I saw were all of a decent size, as were the bathrooms. It’s the staff that really make this place though, they were informative, funny and most importantly, genuinely friendly.

If you want to read more about my time in Bratislava, and how it could be one of your cheapest European weekend getaways ever, click here!