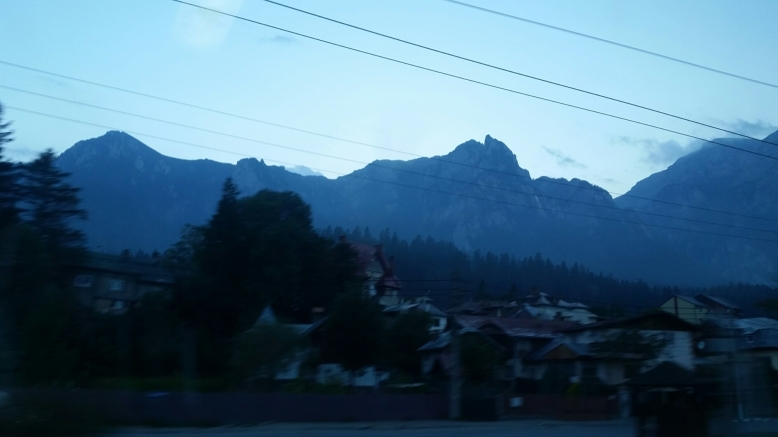 The view: officially one of the best things about the overnight train.

This was my first ever experience on a sleeper train. I’ve travelled via boat, tuk tuk, camel, I’ve even hitched a ride on the back of an open lorry in Sri Lanka, but this was definitely very different to all of them and not what I was expecting!

I arrived early and got to my little three berth cabin. I was originally going to get a private bed for security but then thought screw it. The room had the floor space of about a double bed, and only the top and bottom bunk were set up so the bottom (mine) could be used as a sofa. My rucksack alone took up more than half the luggage rack so I wasn’t sure what to do if I ended up sharing with two other backpackers, as the under-bed space was limited. There was some space on the floor, but not a huge amount.

I’ve written another post with a full list of facilities the cabin contained, which you can check out here.

Anyway when the guard came by to collect my ticket just after we set off (we left just before schedule – be punctual for this train!) he asked if I wanted to upgrade to a private as my two roommates wouldn’t be joining me until 2 and 4 am respectively. I still genuinely have no idea if this was a scam or not but I decided to go for it anyway, as I’m in hostels for almost the entirety of the next month so I’ll give myself one more night of not having to share a room. I also thought this way I would get a full night’s sleep – ha.

So after the conductor left another man knocked to tell me the restaurant was open. I went along a short while later. The menu is almost entirely in Romanian but there is a little English there. The prices are listed in lei and forint, but you can pay in euro and dollar too. Be warned if you do this you will be subject to the restaurant worker’s own exchange rate. They also don’t carry much change. Once I picked out my choices, I sat and waited. The waiter came up and asked me if salad was okay – I assumed he meant to go with the grilled chicken I ordered so said yes as neither of us was particularly fluent in one another’s language. He then came along and put separate salad, bread and orange juice down for me. Turns out that was all separate, but too late now, I had to pay for it. It all tasted okay anyway. 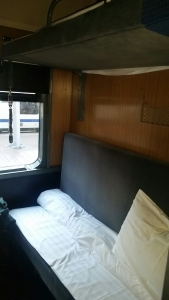 A three bed cabin with the bottom two beds folded to make a day sofa.

Bed time. I thought sleeping on a train would be like sleeping on my former ship – it was, but just noisier and could feel like I was in some really stormy seas! The room was also really chilly no matter how much I put up the temperature, and the condensation from the window made my pillow soggy. Also, if you are six feet plus, those beds are just not made for you, sorry. So basically, not the best night’s sleep I’ve ever had!

This all being said, I still think I had it much better than the six berth-ers. Every time I walked past one with an open door (which was often, as a six sleeper means less security) it just looked really crampt and uncomfortable – even more so than my three bed, had I actually ended up sharing with two other women. I couldn’t see any real space for luggage either.

Anyway I got to sleep about two, only to be woken at four and five respectively by passport control knocking on my door. That was it for my night’s sleep. Breakfast was similar to dinner, but I paid up front in the hope of avoiding the waiter bringing me extra food. I ordered coffee and an omelette, and the guy turned up with coffee, orange juice and cheese and ham toasted because the omelette wasn’t going to be ready for awhile. I finished quickly and cancelled the omelette just in case he tried to charge me for the extra plate of food.

I spent the rest of the journey trying not to doze off. I never tried the shower but the bathrooms were clean, stocked and never busy, so that’s one plus.

It’s a cheap and easy way to get from one city to another, and I’d probably do it again, but only because spending seventeen hours doing the same trip in the day sounds worse. I’d also recommend just taking your own food and provisions, and make sure all your electronics are fully charged as there is a real lack of sockets!