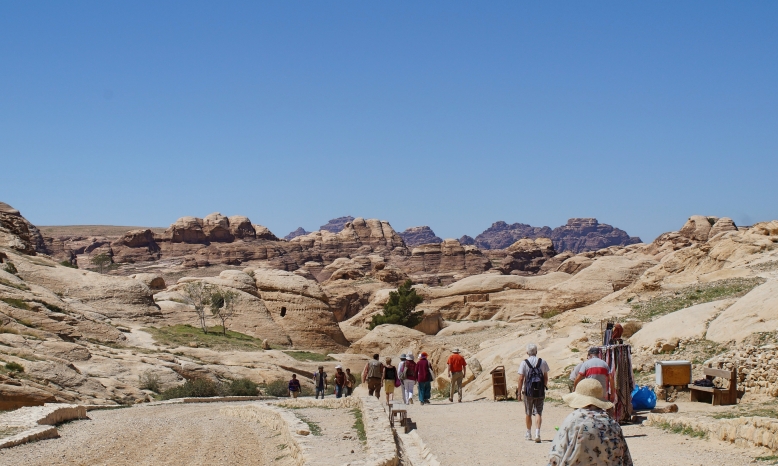 Petra has been on my travel bucket list since my bucket list’s very first incarnation – something I’m sure is the same for many of you. It really didn’t disappoint. Even the two hour drive from Aqaba was incredible – we drove past Wadi Rum and so many picturesque places, I looked out the window the whole way there and back.

Detail of the beautiful ‘rose rock’ that makes up Petra.

We had a guide called Basel – and I certainly recommend getting one, Basel was fabulous – who gave us such a wonderful background to the site and pointed out a few things I might have missed right from the very start. You see, you have to walk a couple of kilometres before you actually reach the Petra. You can get horses or horse and carriages to take you, but you will see so much more if you just walk it (plus those two wheeled carriages look terrifying when going at speed). The first part of the walk is out in the open (pack a hat, tons of water and sunscreen – the heat is no joke), and you have amazing views like the one pictured above.

After this, with the entrance guarded by two Bedouins in traditional dress, is the Siq. Walls of rock up to 180m high enclosed us as we made our way through the mile-long narrow gorge through the mountains. The path is only a few metres wide in some places, and the rock’s stunning shades of red and orange are beautiful. The acoustics are fantastic too, the loud crashing hooves interrupting the calm periodically as another horse and carriage rushes by sound really dramatic.

When we eventually reached the final turn of the Siq, Basel made our small group stop. We lined up in two rows, our hands on each other’s shoulders as a guide, and slowly marched forwards with our faces looking to the ground. When we rounded the corner and were in position, Basel slowly counted down, letting the anticipation build before finally allowing us to look up. The little bit of fun paid off. The first look we got of Petra was the Treasury in all of its breath-taking glory. The popular pictures you see of it really don’t do it justice. The carved face is still imposingly massive, and I had to stand at least twenty feet back just to try and get the whole building-front in a picture. The detail amongst the rose-stone columns and doorway are still visible and clear, and although we weren’t allowed inside, the door remains unblocked so we could take a peek from afar. 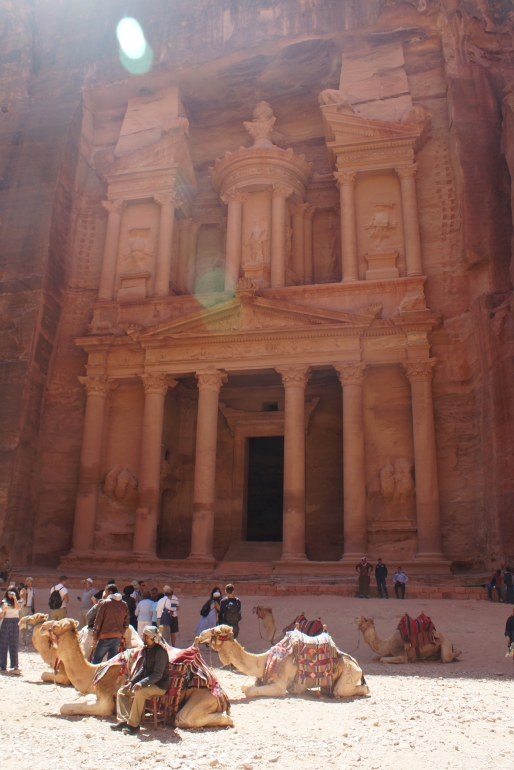 Camels outside the Treasury.

From there we walked on to the right, and the site gets decidedly less crowded and more open. Although the rocks still towered above and surrounded us, there was plenty of space for us to walk around and explore. We mainly stuck to the big path at the start, however there were many smaller, less-trod ones that we took later.

Some of the ancient buildings and rooms cut into rock.

Inside the site there were only a few stalls allowed – my favourite one was full of sand bottles. A man created small pieces of art with the colourful ground up rocks from the site, which you can purchase to take home. They’re available in all different prices and sizes, and Basel told me it’s the only stall that legitimately used true Petra rocks.

You can buy detailed sand bottles made from the colourful rocks found in Petra.

Further on down, past the impressive theatre and at the far end of the main walkway, there was a path cut into the rock that led up into the mountainside. The walk led up to the monastery. The path was long and tricky (it took about an hour to climb), but the views on the way up took my breath away (although that could have also been my general lack of fitness). 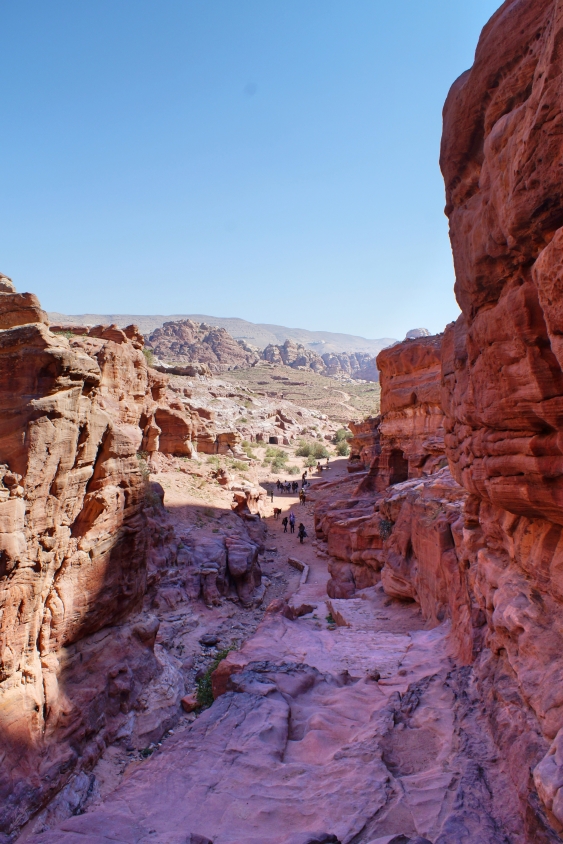 On our way back my friend Imelda and I bartered for a camel ride for the 3km journey back to the entrance. I’d ridden a one-hump camel before, but never a two hump camel. It was an experience… a weird, uncomfortable but very funny one! 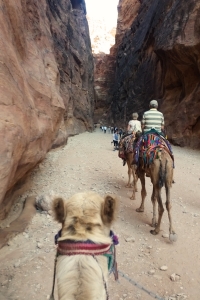 Hitching a lift back to the exit.

It really shocked me how few people were at Petra, considering the worldwide status this ancient city has. Basel informed me sadly that, due to current world events, Jordan’s tourism is at a low. A few days previous to our visit, only a hundred people visited Petra during the entire day. Even on the day of our trip, I’d estimate only a thousand people were there, at most. I can understand why people may be nervous, but I never felt uncomfortable or unsafe during my time in Aqaba. Jordan has worked to stay neutral during these conflicted times, Basel told us, and they want to welcome people.

My final look at Petra was also my very first – the iconic view of the Treasury. The city has been named one of the new Seven Wonders of the World, and with good reason. Is Petra on your bucket list? If it isn’t, it should be!

9 thoughts on “Petra: the Rose City”